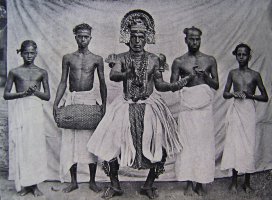 The brilliant blue of the sky. The vibrant green of the lush rice paddies. The red of the hills. The deep blue of the sea and the dark green of the forests. Add to this glowing embers and bright flashes of lightning during monsoon storms. Kerala is home to this wide range of colours. This is also where the storytelling form of Thuḷḷal was created during the 18th century. Episodes from Indian epics and classical literature (all written in Sanskrit) were retold by the poet, temple drummer and dancer Kunchan Nambiar in Malayāḷam, the language spoken by the common people. Through his linguistic genius he created texts that came alive and were enriched with philosophy, humour and social criticism.  By combining singing, rhythm, facial expression, hand gestures, dance and theatre Thuḷḷal quickly became a popular and regular part of the traditional temple festivals (something unchanged right up to this very day).

When gods got married audiences believed they were at a nearby royal court. Hunting scenes taking place in the jungles described in detail what overzealous drunken soldiers might shoot from the trees (exceptionally hairy comrades, for example, who had fled there from prowling tigers, thinking themselves safe). Brahmans (members of the priest castes and the feudal masters of the time), who always indulged in generous feasts, and became so bloated from the extensive meals that they could not get up any more... Those are just some of the examples indicating why Kunchan Nambiar's Thuḷḷal stories became so popular so quickly.

Thuḷḷal (dancing with a firm step) is performed in three styles: Ōṭṭan-, Śῑtankan- and Parayan Thuḷḷal. The first two are similar in costume and method of performance and are very popular with the audiences. A caste of untouchables gave Parayan Thuḷḷal its name. The texts of this style are especially full of philosophy and social criticism. But even today it is difficult to find enough event organizers, artists and audiences willing to engage with these topics.

Thuḷḷal is a solo performance and is staged by male and female dancers (although the latter are not seen very often). The dancer will recite a line from a text which is then repeated by the background singer. The next line follows, which is again repeated. During the pauses in singing the dancer has ample time to engage with the audience by means of body language and facial expressions. A drummer accompanies the performance on the Mṛdangam barrel drum and gets his cues from the rhythm set by the background singer and his cymbals.

The average length of a performance is between one and one and a half hours (a full performance of the texts could take up to four hours). The repertoire of an artist will range from five to ten stories and is mostly confined to the popular Ōṭṭan- and Śῑtankan Thuḷḷal styles. With few exceptions - such as Keralese culture associations in some larger Indian cities and neighbouring countries - Thuḷḷal performances are only held within the state itself. Reasons for this can be found in the language of the texts (without sufficient knowledge of Malayāḷam understanding the stories becomes impossible) and in the fact that Thuḷḷal performances are not held in the purely classical character, therefore often making them unattractive for audiences from outside of Kerala.